This dish was satisfying without being too filling, but our second entrée—the surf and turf—was the real showstopper. The grilled Kobe beef filet and butter-poached lobster tail were served over mushrooms, asparagus, and sour cream–mashed potatoes. As it happens, we’ve sampled similar entrées in the past few months at both Edge Restaurant & Bar and Ocean Prime, two of Denver’s high-end standbys. Cosmo’s dish transcended them both. I’ve never been much of a lobster fan—to which lobster enthusiasts always say, “You haven’t had it cooked right.” Well, now I have, and it was spectacular. Read more 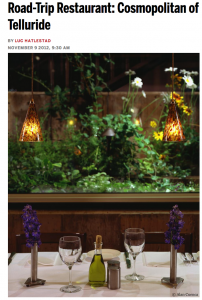